Panicale is a small Umbrian town on the hills that surround Lake Trasimeno. Just nearby, few hundred of meters off the walls on the side with the Perugia Gate, rises a fourteenth-century building, the Church of Saint Sebastian, which in past centuries was annexed to a hospital for the plague victims. Inside the church an extraordinary fresco can be seen, dating back to Perugino’s mature phase: The Martyrdom of Saint Sebastian (1505). Panicale also, therefore, is among the places in Umbria where the “divine painter” left traces of his art.

On entering this small sacred building, viewers will feel almost overwhelmed by a painting fascinating like that, connoted by such a wide, deep, luminous scene. The contrast with the humble place’s semi-darkness is really strong.

Perugino set this episode in the saint’s life inside an architectural space of his own invention, that did not correspond to any building actually existing in Panicale: a square encircled by arches, beyond which a lake and hills can be made out. Yet, though in the absence of real geographic references, the colors, light, and atmosphere do recall the nearby lake panorama of Trasimeno.

So, we can see the setting of this work of art, especially its natural elements, as an idealized version of an Umbrian landscape, that is a recurrent feature in many of the Perugino paintings. The fictional view echoes the natural environment around the lake; which, among the many visual tricks he used in the composition of the fresco, adds connection and detail.

In the same church another important painting can be admired that for a long time had been wrongly ascribed to Perugino: Virgin Mary, between Saint Augustine and Mary Magdalene (1502-06). According to more recent analyses, it might have been a work of his most famous pupil, Raffaello Sanzio (Raphael). Originally made for an altar in the Church of Saint Augustine – in Panicale, just off the Florence Gate – the fresco was later transferred to the St. Sebastian Church in order to have it better preserved. The high level of moisture in the original building would eventually spoil it, in fact.

The works of Perugino in Panicale 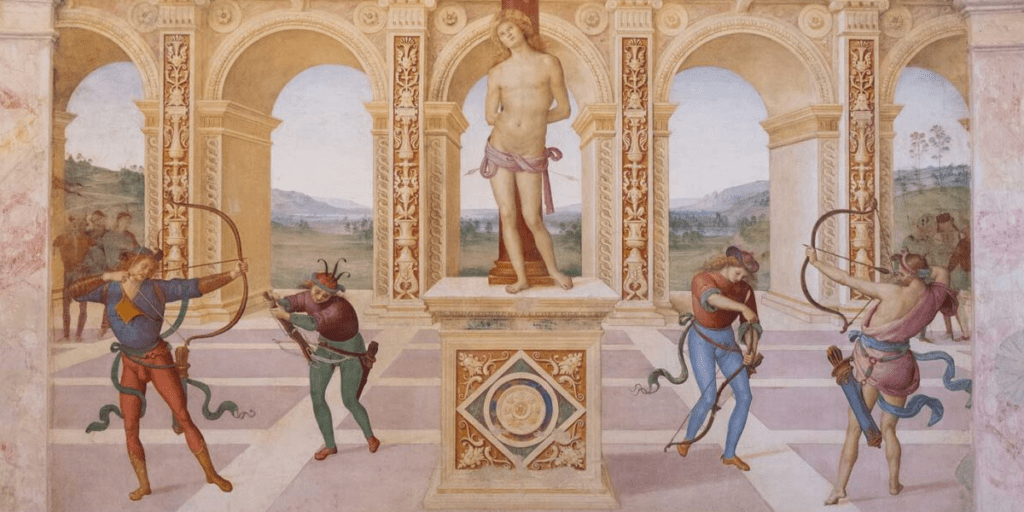 The Martyrdom of Saint Sebastian: A fresco by Perugino in Panicale

Other places to Perugino Perugino was much attached to Perugia, the place he first moved to after spending his youth in Città della Pieve; Perugia would also provide him

Città della Pieve (basically, “country town”) is a special place for Perugino: his family in fact originated from this little town in Umbria, which was

Montefalco, a little town in Umbria as well as one of the Borghi più belli d’Italia (the “Most Beautiful Little Towns of Italy” association), has
Erga Tourism